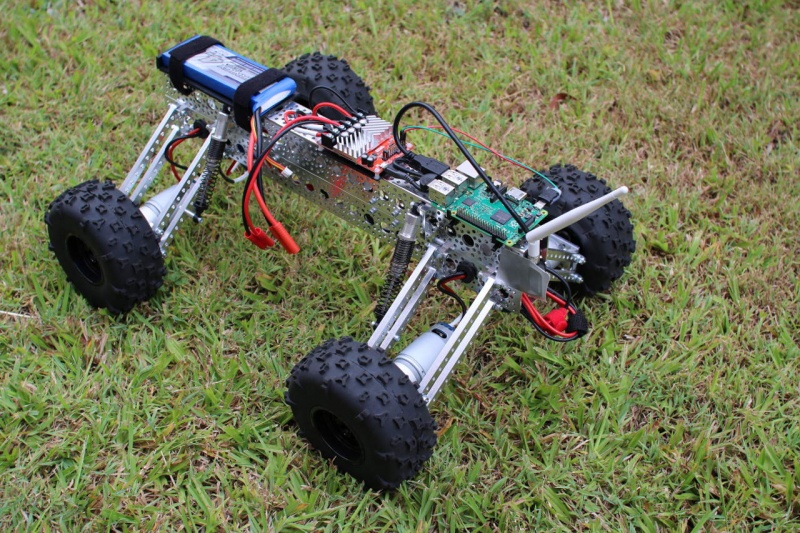 A writer for Linux.com has written a detailed writeup about a robotics project he has developed that uses our RoboClaw motor controller. The robot is built on an Actobotics 4 wheel Mantis chassis and a few additional pieces of Actobotics channels were added to support the electronics used in the build. The Mantis kit use 4 12V 27:1 planetary gearmotors for propulsion. The motors on each side are wired in parallel and then each side is wired to a channel on a RoboClaw 2x45A motor controller. This type of drive system is know as “skid steering” and you may be familiar with it if you’ve ever seen a bobcat-style loader used in construction. Power for the drive system is supplied by the use of a large lithium polymer (LiPO) battery.
A Raspberry Pi is at the heart of this robot and is used to take input for external hardware and send control commands to the RoboClaw motor controller. The power hungry Pi is powered from the battery eliminator circuit (BEC) on the RoboClaw, which on the model used is able to supply up to 3 amps at 5 volts. Communication between the Raspberry Pi and the RoboClaw is carried out over USB which is one of many schemes that can be used for control of the motor controller. The robot’s builder wrote a custom library in C++ to send commands to the RoboClaw and used the Boost library’s serial port functionality to communicate over USB.
Several different devices were used to drive the robot around including a bluetooth keyboard and a PS3 controller. The builder also discusses the possibility of using an RC transmitter. In the case of the keyboard and PS3 controller the devices were paired with a USB bluetooth adapter connected to the Raspberry Pi. Once again custom software was written, this time to translate the input from the controllers to something that could be sent to the RoboClaw.
We thank the author of the writeup for using our RoboClaw controller in their off-road robotics project and for taking the time to document it well.
<< Previous Post
Next Post >>