There is a wide range of battery types on the market, all suited to different applications and user needs. We will be covering the parameters of several battery types and how they work in concert to make or break the success of a robotics project. In this App Note we’ll be looking at three battery chemistries: Lithium Polymer, Lithium Iron Phospate and Lead Acid.

There are several aspects of batteries that should be factored in when deciding on a battery for a project. First is voltage, this will be dictated by what voltage is needed by the drive system. Second, you will need to look at the capacity of the battery and tailor your selection so that your robot will run for the length of time needed. Finally, the current capacity of the battery needs to be selected so that the battery can supply the current needed for your robot under full load.

Lithium Polymer batteries are a form of Lithium Ion battery that have become very popular in consumer electronics, radio controlled vehicles and robotics. They are very light and small for the amount of energy they store and are capable of supplying large amounts of current.

LiPO cells have a nominal voltage of 3.7 volts per cell. A fully charged LiPO is at 4.2 volts per cell and it can safely be discharged to 3.0 volts per cell. An actual LiPO battery is composed of one or more cells and this determines the overall voltage of the battery pack. The batteries are labeled to identify this with a designation such as “2S” or “3S”. The number denotes how many cells are in the pack and the S denotes that the cells are in series, in other words the cell voltages are added up. To find the voltage of the battery pack multiply the cell count by 3.7 volts. Often the voltage is conveniently marked on the battery, but this isn’t always the case.

The second parameter to be aware of is the capacity of the battery. This will be marked on the battery as something like “2600 mAh”. This means that the battery can supply 2.6 amps for one hour, at which point the battery pack will be fully discharged. You’ll need to determine how much current your project draws and use the capacity value to find out how much run time a given battery will provide. LiPO batteries are available in a range of capacities from a few hundred mAh up to 20,000 mAh.

We’ve looked at voltage and capacity, but how much current can you pull from a LiPO battery? After all if the battery can’t supply the current you need your robot won’t operate properly. The answer lies in the “C rating” of the battery. The battery will usually be labeled with a marking such as “5C” or “10C”. This value is used to determine how much current the battery can supply. Simply multiply the battery’s capacity in amp hours by the C rating and the result is the current the battery is capable of supplying. For example, a 2000 mAh battery with a 20C rating is: 2 Ah * 20C = 40 amps. Note that there are often two C ratings on a battery. The first is the constant rating, or the amount of current that can be supplied for any amount of time. The second C rating is the peak value. This is the amount of current that can be supplied in short burst, usually no longer than 5-10 seconds. 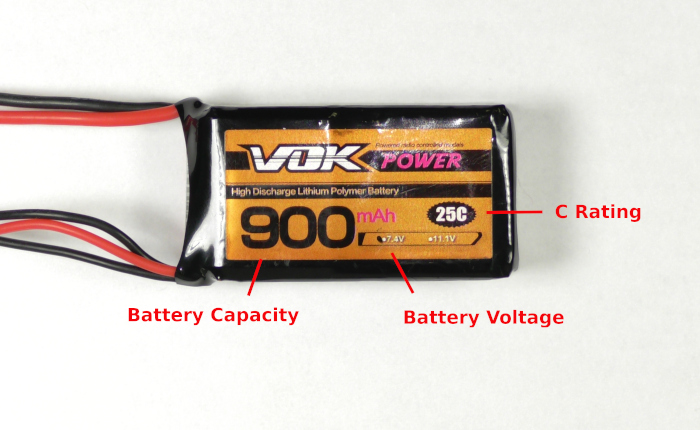 LiFePO4 batteries are another type of Lithium Ion battery similar to LiPO batteries. They utilize a slightly different chemistry than LiPO batteries and are somewhat safer in regards to fire risks.

LiFePO4 batteries can be found in an even wider range of capacities than LiPO batteries. Small packs in the 600 mAh range can be easily found and very large packs exceeding 100 Ah can also be found. Note that very large LiFePO4 packs are still quite expensive and this may be a factor in whether or not you decide to use one.

Lead acid batteries are what you’ll find in most cars and trucks. They are bulky and heavy for the amount of power they supply, but they can supply large amounts of current and can withstand more abuse that Lithium Ion batteries.

Lead acid batteries tend to self-discharge when stored for long periods of time. This means that the voltage of the battery falls while not in use. When the voltage falls too low the battery can be damaged. To prevent damage from occurring and to keep the battery ready to use a float or trickle charger can be used to maintain the battery at a healthy voltage.

Lead acid batteries typically have a lower C rating than LiPO batteries, but due to their often large capacities can still supply large amounts of current. This is why they are used as starting batteries for vehicles which can require anywhere between 10 and a few hundred amps when starting an engine.