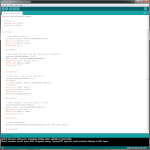 The RoboClaw normally uses encoders in an automatic closed loop control scheme to maintain speed and position. However there are situations where more custom control from a micrcontroller is called for. This Application Note covers using an Arduino to read, set and reset encoders using the BasicMicro Arduino library.

1. Follow this App Note to step 17 to configure the RoboClaw and Arduino.

There are two function used to read the current encoder values. As per their naming, one is used to read channel 1 and the other channel 2. Only the address of the RoboClaw needs to be passed to these functions.
ReadEncM1(address)

Code example:
In this example “ReadEncM1” is called on the RoboClaw object to read the current encoder count, the address of the RoboClaw hardware is passed as the only argument to the function. The value returned is saved to the variable “motor_1_count”.
int motor_1_count = roboclaw.ReadEncM1(0x80)

These two functions are used to read the speed of the motor in encoder counts, there is one function for each channel. The only argument to these functions is the address of the RoboClaw.
ReadSpeedM1(address)

Code example:
In this example “ReadSpeedM1” is called on the RoboClaw object to read the speed of motor 1 in encoder counts. The only argument passed to the function is the address of the RoboClaw.
int motor_1_speed = roboclaw.ReadSpeedM1(0x80)

These functions set their respective channel’s encoder count to a given value. The address of the RoboClaw and the value to be set must be passed to them.
SetEncM1(address,val)

Code example:
In this example the count of the channel 1 encoder is set to 10,000 counts. The address of the RoboClaw is passed as well as the count to set.
roboclaw.SetEncM1(0x80,10000)

These functions are used to set the motor for a given channel to a specific position in encoder counts. The address of the RoboClaw, an acceleration value, a deccelertion value, speed, position and flag value must be passed to the functions. The flag value determines whether or not the command is executed immediately or stored for later execution. A value of “0” stores the command and a value of “1” starts the positioning command immediately. The “M1M2” version of these functions allows for both motors be positioned independently and at the same time.
SpeedAccelDeccelPositionM1(address, accel, speed, deccel, position, flag)

Code example:
In this example the position of motor 1 is set to 15000 counts. The address of the RoboClaw is passed as the first argument to the function. The acceleration and deceleration values are set to 10000 and the speed value set to 2000. The flag argument is set to “1” so that the command executes immediately.
motor_1_count = roboclaw.SpeedAccelDeccelPositionM1(0x80,10000,2000,10000,15000,1)

There is sample code available to demonstrate the use of the functions detailed in this App Note. Follow the instructions below to obtain the code and test it with the Arduino and RoboClaw configured in step 1.
1. Download the RoboClaw Arduino library from here.
2. Add the RoboClaw Arduino library to the Arduino IDE. Note the location the RoboClaw library was downloaded to and then open the Arduino IDE. In the top menu click on “Sketch” and the go to “Include Library” and then “Add .Zip Library”. In the dialog box that opens select the downloaded .zip file and the click “Open”. The library has now been added to the Arduino installation and can be referenced from sketches. 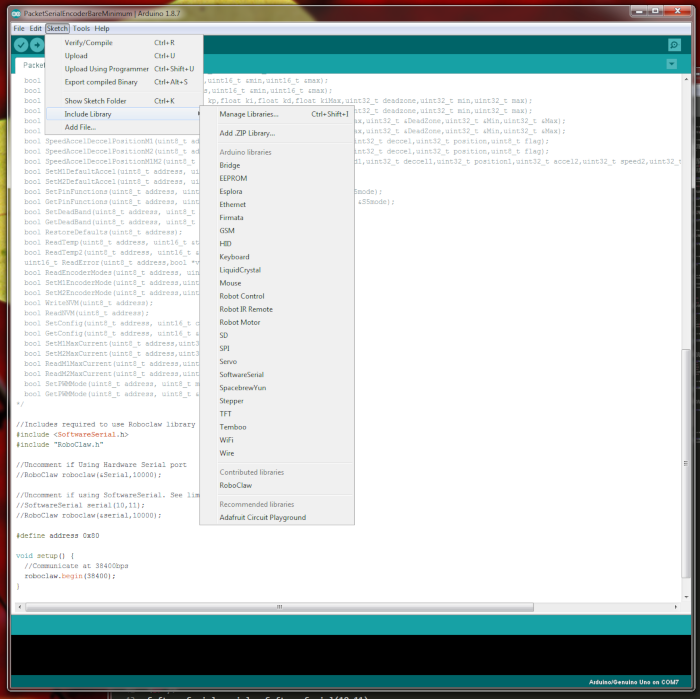 Dialog for adding .zip libraries to the Arduino IDE installation.

3. Download or clone the sample code for this Application Note from here.
If Git is installed on the machine in use it can be cloned by entering the following command in the terminal.
git clone https://github.com/basicmicro/using_encoders_arduino.git
4. Open the example code in the Arduino IDE and upload it to the Arduino board.
5. The Arduino should now be busy running the example code and operating the attached RoboClaw.