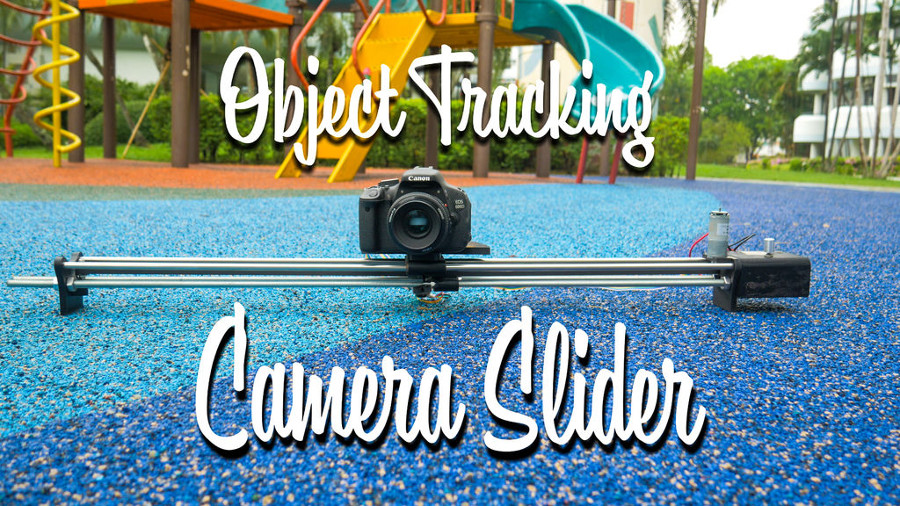 Figure 1: The completed camera tracker.
A maker by the name of Saral Tayal has designed and created a camera slider that will track an object as the camera pans across
an object. The effect produced by the system is very professional looking and unique. Similar systems have been desgined before but Saral’s system is built with widely available components and can be contructed easily and for a cost much lower than that of a commercial system.
The mechanical components of the system are a mix of 3d printed parts, including gears, and off the shelf components that can be found anywhere quality hardware is sold. The camera travels on a pair of rails created from smooth metal rods and threaded rod is used elsehwere in the build. Rotating parts in the tracker are supported with standard skatebaord bearings and the whole build is held together with metric fastners.
The camera is moved back and forth, as well as turns, with the help of a pair of brushed gearmotors that have integrated encoders. Both motors are controlled with a RoboClaw 2x15A motor controller. The motor’s encoders and the RoboClaw’s position control loop system create a pair of heavy duty servos that allow for fine and repeatable control of the camera’s position and rotation. This is the key to how the system is able to work as it does.
A rotary encoder and pushbutton allows the user to change settings such as speed which are displayed on an LCD screen on the side of the assembly. The brain of the whole system is an Arduino Uno, although other Arduino compatible boards could be swapped it to suit the needs of someone repeating this build. The Arduino receives encoder data from the RoboClaw and uses this to send position commands back to it. The Arduino also handles controlling the LCD screen and accepting input from the controls.
The camera platform is capable of handling a heavy DSLR camera and lens. A camera mounts to the platform with a standard 1/4-20″ connection. Smaller cameras with a standard photo connection could easily be used with the tracker.
If you’d like to build your own version of this camera tracker Saral has provided all the information you’ll need to make one of your own.
We thank Saral for his well documented project, his generosity in providing the plans to replicate his success and for demonstrating the abilities of our RoboClaw motor controllers.
<< Previous Post
Next Post >>