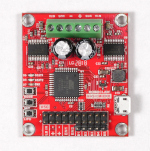 The RoboClaw has a wide range of features and capabilities that allows you to create a variety of robotics projects. This Application Note features an overview of the RoboClaw board and guidelines on using it successfully.

*The following Application Note applies to all RoboClaw models, however all of the images contained here are of the RoboClaw 2x7A.

The RoboClaw has two terminals for connecting your choice of a power source. The terminals are labeled (+) and (-) for positive and negative respectively. Be careful to not reverse the connections as damage to the board will occur. 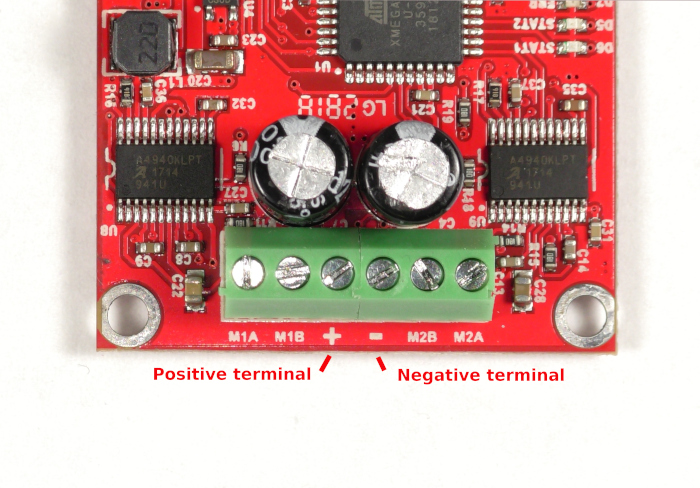 The pin headers on the RoboClaw are used for a variety of functions and are labeled accordingly. The headers are 0.1″ pitch. All 0.1″ jumper wires and standard RC servo connectors can be used to connect to them. 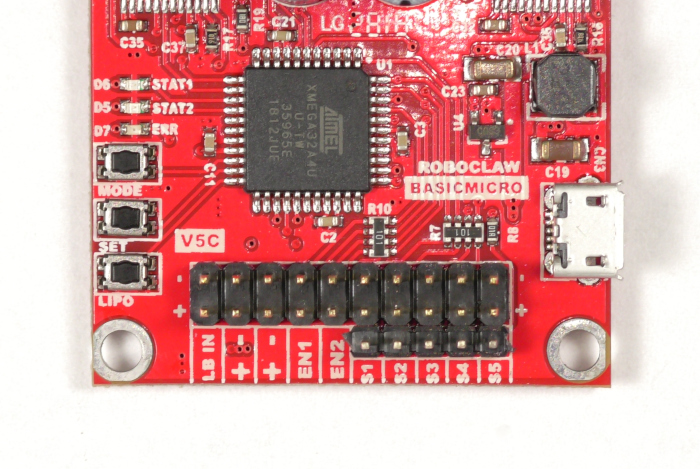 Figure 3: Pin headers on the RoboClaw.

This pair of pins is for using a separate battery to power the RoboClaw’s internal logic circuitry. When driving heavy loads the RoboClaw can experience brownouts when the voltage sags below 5VDC leading to the RoboClaw operating improperly. Note that the header is polarized with the pin closest to the board edge as the positive pin.

Next to the LB battery input are a pair of headers used to power encoders. They are labeled with (+) and (-). This header provides 5VDC for two encoder channels, one per header. Notes that these headers are polarized with the positive pin being the one closest to the board edge.

Headers S1 and S2 are used for a variety of purposes. In RC and Analog mode these headers act as inputs from radio receivers, potentiometers and joysticks. In packet and standard serial mode these pins act as RX and TX channels for serial communications as well as slave select inputs. There are three pins on each of these headers. The pin closest to the board’s edge is the signal pin, the middle pin is positive and the pin on the inside edge of the board is the negative pin.

These pin headers can be used for a handful of functions different from those of S1 and S2. S3 can be used as a flip switch to change motor directions in RC mode. These headers are also used for voltage clamping functionality, limit switches, home switches and e-stops.

There are three small LEDS labeled STAT1, STAT2 and ERR. These are used to indicate the status of the RoboClaw. In normal operation the STAT1 led blink rapidly when connected to Motion Studio. Also the STAT1 and STAT2 leds will light up and stay lit when a motor channel is active. When the RoboClaw encounters problems these LEDs are also used to indicate a variety of warnings and fault conditions. See this App Note or the manual for further information.

There are three buttons labeled MODE, SET and LiPO. These buttons can be used to set the mode of the RoboClaw as well as other related settings. See this App Note or the manual for information about using these buttons.

On the edge of the board there is a micro USB connector. It is used when configuring RoboClaw with Motion Studio. When RoboClaw is connected via USB it can send commands and operate both motor channels. Please note that the RoboClaw cannot be powered via the USB port and always requires that a power source be connected to the power terminals.

The RoboClaw has several features to protect itself. Current limiting is automatic and the setpoint for current limiting can be set by the user in Motion Studio. The RoboClaw also has automatic temperature protection with preset setpoints. In the case of both types of protection the board will take the appropriate action to prevent damage to itself.

RoboClaw can be used with both absolute and quadrature encoders and supports a decoding rate of up to 19.9 million pulses per second. Encoders allow the RoboClaw to precisely control both the speed and position of both motor channels.

RoboClaw can use what is known as PID control when it controls the speed and direction of motors attached to it. It allows the RoboClaw to maintain speed and position properly even when there are load changes to a motor. The P, I and D parameters can be automatically set by the tuning system in Motion Studio or be manual set by the user.

Basics of using the RoboClaw board

Power connections are made at the large terminals labeled (+) and (-). A battery is the recommended power source for all RoboClaw boards as switch mode and linear power supplies don’t tolerate the regenerative voltage from the RoboClaw well. Wiring the RoboClaw power backwards will result in damage to the board. See this App Note for information on proper wire termination. See the user manual for a guide to using power supplies with RoboClaw.

The RoboClaw has an on-board BEC which is a voltage regulator that supplies a 5VDC source of power that is used by the RoboClaw and can also be used to power microcontrollers, RC receivers and encoders. The 5VDC source is available at any of the positive pins on the pin headers except for the logic battery input header. Similarly the ground pin on any of the headers, besides the LB in headers, can be used as a common ground for devices connected to the RoboClaw. See this App Note for more details about the RoboClaw’s BEC.

Encoders are connected to the ENC1 and ENC2 headers on the RoboClaw. If you are using quadrature encoders be sure that the leading channel is attached to the pin closest to the boards edge. When using analog encoders or absolute encoders the connect the output of the encoder to the pin closest to the board edge. After wiring your encoders you can check the operation of them in Motion Studio. There you can ensure that the pulses are being counted properly and that the motion of the motor corresponds to the encoder counting.

As stated earlier do not hookup the RoboClaw’s power terminals in reverse, permanent damage will result. Also, when removing power from a RoboClaw always disconnect the positive lead before the negative lead.

Do not disconnect any motors from the RoboClaw while it is powered as damage is a likely result. Always make sure that the motors are stopped before powering down the RoboClaw. Voltage generated by rotating motors can power the RoboClaw when it is off and cause it to operate erratically.

If you are trying to operate the RoboClaw in bridged mode you must configure it in Motion Studio before wiring the motor or else the board may be damaged.

Each RoboClaw has voltage limitations, including minimum and maximum voltages. This is the case for both the main battery as well as the logic battery. User-defined minimum and maximum voltage can also be set for the RoboClaw via Motion Studio.
There are also current limitations for each model of RoboClaw. Each model has a maximum constant current limit and a higher peak current limit that can be maintained for a short period of time. User-defined current limits can also be set via Motion Studio.
Every RoboClaw has predefined limits for temperature to prevent damage to the board. At 85C RoboClaw will throw a warning and at 100C will throw a fault. If a RoboClaw has a fan installed it will turn on at 45C and turn off at 35C.
<< Previous Post
Next Post >>